Bat Mitzvah – The Day a Jewish Girl Becomes a Woman 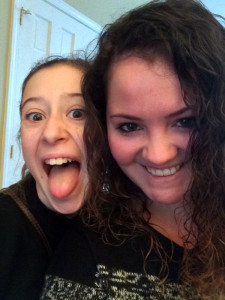 The moment I came here in August, I was told that Leah was already preparing for her bat mitzvah. I was totally excited, as I had never experienced something like that before. Yes, I had my own confirmation, but let me tell you:

It is NOTHING compared to what a Jewish boy or girl has to go through on that day.

Leah had been studying her Torah and Half-Torah over and over again, because you can’t just read out of it. There are no syllables and you have to know what is in front of you.

As that weekend approached, family flew in and then it was Saturday morning.
We had to wake up relatively early, as we had to be at the Synagogue at 9 am. Ready and set we went to the Synagogue which is also Carly’s and Aidan’s school. At least we knew where to go.

The service was long! Almost 3.5 hours of chanting, standing up and sitting down and more chanting. Leah had to read from the Torah and it was so interesting to listen. You don’t simply read from the book: You chant.
The rabbi sounded more like an opera singer. It was amazing!

After the service, we had brunch in the gym of the school and then we headed home. I definitely needed a nap! But the evening preparations were going on further. The hotel had a very nice and big room prepared and we just had to put up all of our decorations. Candles, lights, etc.

And then the party started! Wow, that was a party. Not everyone throws a party like this. The food was amazing, the music loud and pretty modern but the best part was the photo montage. 16 minutes of, not at all boring, pictures surrounded by music flew over the wall. So pretty.

It contained a lot of stress and preparation but it was so worth it. I can’t wait to see Aidan’s bar mitzvah! 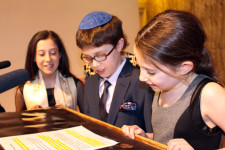 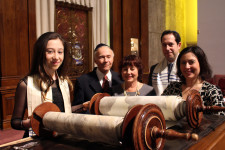 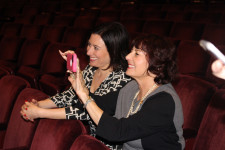 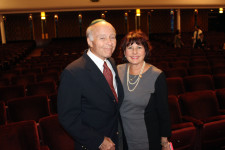 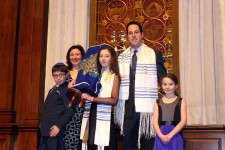 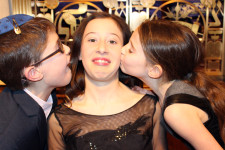 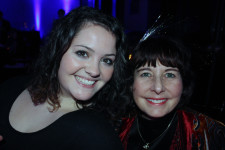 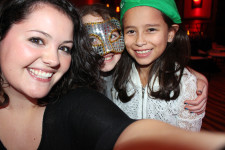